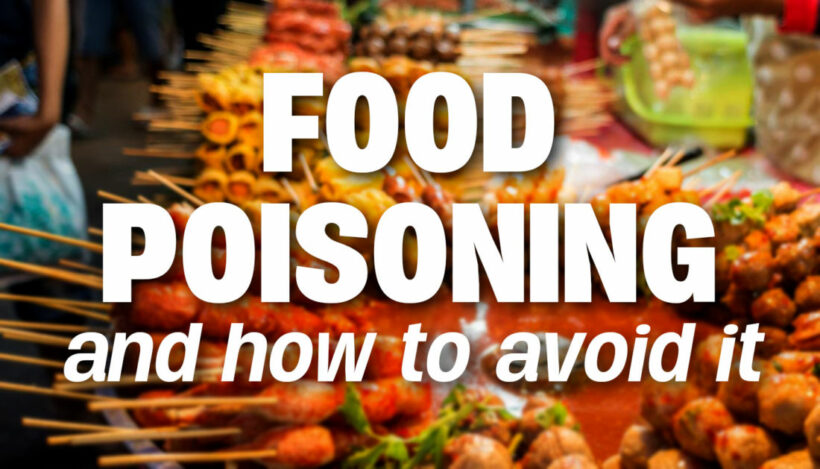 NOTICE: The Thaiger are experienced travellers but we’re not doctors. This information is provided as a general guideline if you are confronted with food poisoning. In all cases consider seeking medical attention.

Travelling in foreign locations and trying out the local dishes will always risk a bout of the dreaded food poisoning – Bali belly, Thailand tummy. Thailand has some of the world’s tastiest food but also the potential to put you flat on your back for a few days.

Travelling around Thailand you face a double whammy of exotic new spices along with an equally exotic list of new microbes and bacteria working hard to make your day a bad one. One bit of bad luck and you’ll disrupt the delicate balance found within your digestive system.

Contaminated water? Spoiled meat? Food left out in the open for too long? Whilst the vast majority of Thai food, even the street food, is unlikely to upset your digestive system, the more adventurous your eating, the more likely you are to confront a bout of food poisoning along your journey.

It will start with stomach cramps, nausea and sweating. It will usually kick in in the first four hours after your meal, probably earlier. You’ll know it!

Projectile vomiting and diarrhea are usually the result and the next 10-12 hours of your life will be spent in close proximity to a toilet. You will feel like death-warmed-up… chills, cramps, maybe a fever and lots of sweating. But you WILL get over it.

Here is The Thaiger’s Top Ten ways to avoid, and recover from, a bout of food poisoning. 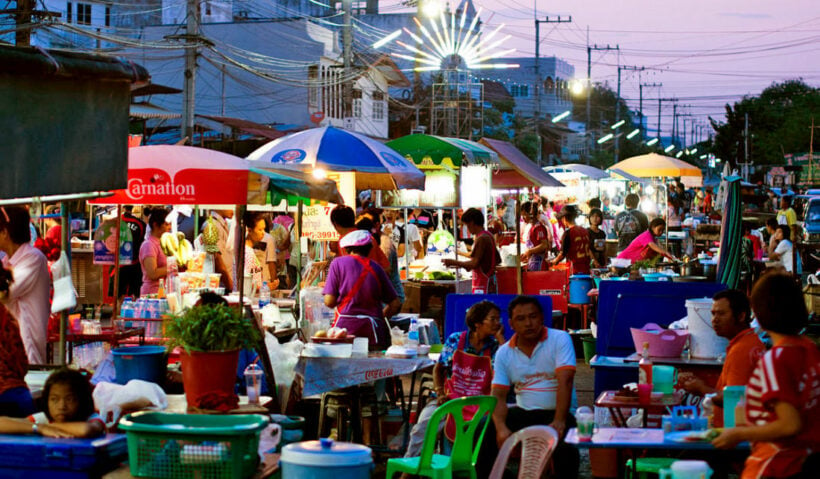 The best way to avoid food poisoning, or its lesser partner traveller’s diarrhea, is to not get it in the first place. But even the most cautious tourist can consume something they think is safe… but isn’t.

Avoiding food poisoning is everyone’s obvious aim, but if it does happens it’s not the end of the world. But it is going to put a dent in your plans for a few days. Be cautious, read up about potential problems and turn you brain on before you go ‘full commando’ on food you’ve never experienced.

Unless you are absolutely sure they have been copiously washed with filtered water it is best to avoid eating anything in this category. Cooked greens are usually ok, especially in boiled soups. Try to also avoid raw unpeeled fruit or vegetables as well.

Salads in a street restaurant, somewhere off the beaten track? Probably not.

Street food, literally food you can buy on the kerbside or footpaths anywhere in Thailand, often looks and smells amazing, and is usually safe to eat. But avoid anything that looks like it’s been sitting around in the sun and humidity. Stick with bubbling boiling soups, freshly fried Pad Thai, and meat that has been grilled right in front of you.

The vast majority of restaurants and bars in tourist areas use ice that comes from frozen purified water and have it delivered daily. Off the beaten track it’s best to ask first if the ice (nam kang) is made from tap water or is fresh that day. When in doubt, leave it out – better a warm beer than half a day leaning over the toilet 🙂

It’s best to observe the golden rule about drinking water in Thailand – never drink the tap water. The down-side is that most of the potable water is going to come to you in a single-use plastic water bottle which we’re all trying to avoid these days. Most hotels, and some restaurants, will have drinking stations where you can top up your water safely.

Drinking water is very cheap in Thailand and is available everywhere, like EVERYWHERE!

All that said, we suspect that in places like Phuket, Chiang Mai, most of inner Bangkok, Pattaya and Hua Hin, the water out of the tap IS safe to drink these days. But don’t take our word for it! As a traveller, you need to err on the side of caution.

The Thaiger has lived in Thailand for a decade and brushes teeth and uses the local supply (in Phuket and Bangkok) and has never had any ‘tummy-rumbles’ from interacting with the local potable water supply. But that’s not a scientific study, just our own experience.

“Mmmm, that pizza was great last night. I’ll have the rest tomorrow.”

Maybe, but you need to refrigerate it before it gets cold and then eat it quickly the next day before it has time to ‘warm up’. If it’s more than a day old, throw it out or feed it to the dog or cat who have cast-iron stomachs compared to humans.

Ditto for any other leftover you think you’d like to save for the next day. 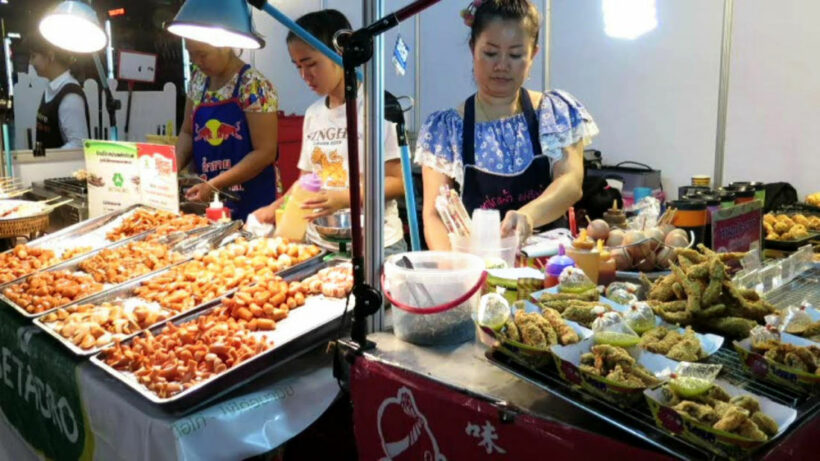 If you are experiencing diarrhea or vomiting you need to make sure you rehydrate properly. If you are not doing a great job holding water in, go to the nearest pharmacy and pick up Oral Rehydration packets.

If you are suffering from food poisoning in Thailand you will do well to grab some of these packets. They should cost you no more than 5 baht. Use up to 5 a day.

If it’s a mild case you are probably going to be able to self-medicate your way back to perfect health. If it’s serious and you’re just flat on your back (between rushing to the toilet) for more than a day, then you’d be advised to seek medical attention. If you have blood in your vomit or stools, or high fever lasting more than an hour or so, seek medical attention quickly.

Thai doctors usually go down the medication route whereas some western doctors would now specify a more natural approach to recovery. If you have medical and travel insurance (you’re insane travelling without both!), and are in places like Bangkok, Chiang Mai, Phuket, Pattaya, Samui, Hua Hin or Khon Kaen, then head to a private international hospital, rather than a local hospital.

There’s nothing really wrong with the local hospitals – you will be charged less but you will be charged – but you’re going to have to battle language barriers and waits at a time when you’re not really focussed on anything except how sick you feel.

A better choice would be a local clinic – Google is your best friend here or ask you hotel or someone with some local knowledge.

CAUTION: A lot of people use to take Loperamide aka. ‘Imodium’ when they had diarrhea in the past. Generally medical advice these days is NOT to take these drugs unless you consult a doctor first. Read more HERE.

Your body will use a lot of energy trying to evacuate whatever is making you sick. Sometimes you will wonder where everything coming out of you, is coming from! It’s just a never-ending source of hell. At some stage though it will calm down and your poor body will be exhausted. So rest.

Don’t be afraid to miss out on a couple of days of activities as a result – put your body and recovery ahead of anything. For now you need lots of sleep and rest.

For a few days stay off the exotic foods that put you here in the first place. Go bland, go BRAT. The BRAT diet is tried and tested and, whilst not very exciting, will hep the flora of your stomach recover quickly while getting enough nutrients to keep you going.

You can add to this fairly palette with other gentle foods… plain biscuits, oatmeal, weak tea, apple juice or flat carbonated drinks (just open them and let them sit for a few hours to lose their ‘fizz’), bland ‘broth’ soups, boiled potatoes.

After a few days on BRAT you can start trying things like soft-cooked eggs, cooked fruits and vegetables, and white meat, like chicken or turkey.

Importantly, until your body has finished getting rid of ‘whatever is ailing you’, don’t eat anything. It will just end up, along with everything else, making a quick journey from one end of your body to the other.

Start drinking flat soda (lemonade) or carbonated drinks, or ‘Gatorade’-style electrolyte drinks (you can powders from any Pharmacy) as soon as you can to keep the body hydrated, even fresh coconut water, (although make sure it is fresh, otherwise you’re going to end up in the toilet).

Dehydration is a big problem following a bout of vomiting and diarrhea so focus on getting some fluids back into your system as soon as you can tolerate it. 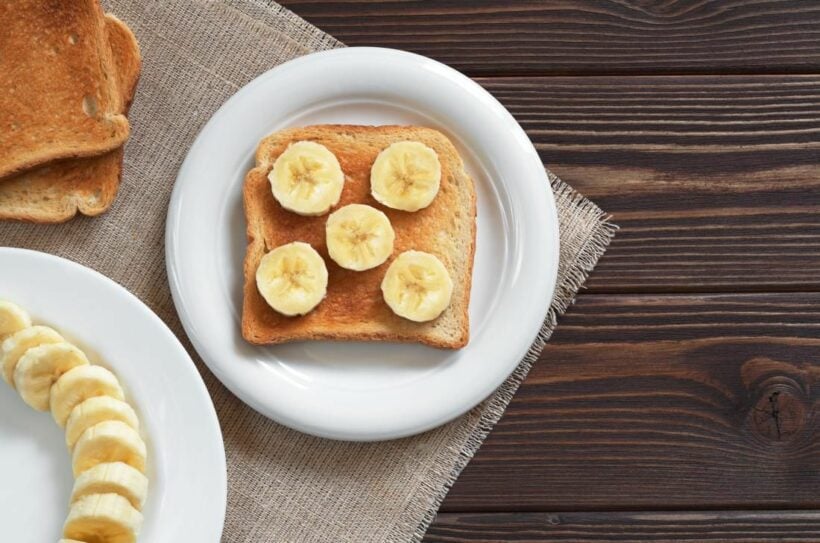