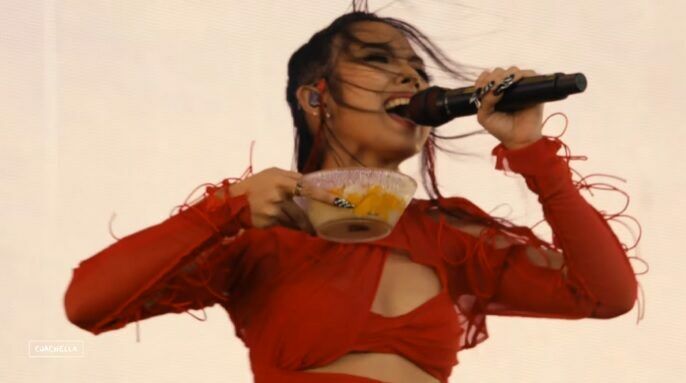 Mango sticky rice is in the international spotlight after a young Thai rapper promoted the popular dessert during her raunchy performance at the Coachella music festival. Now the Cultural Promotion Department is planning to propose that mango stick rice is an intrinsic part of Thai culture, to be included on the list of Thailand’s ‘UNESCO intangible cultural heritage’.

At the end of her set — in which the young artist scantily clad in a red outfit shook her booty surrounded by mirrors and men in black — Milli brought a bowl of mango sticky rice to the stage and began eating it. She then shouted to the audience, asking who wanted to try it. And just like that, thanks to the power of social media, her stunt caused the famous Thai dessert to sell out at almost every shop in Thailand on Sunday.

Mango sticky rice is one of the most popular Thai desserts, featuring sweet coconut milk-infused sticky rice topped with ripe orange mango — the sweet one — and coconut milk sauce. The dish is the perfect choice for the summer season in Thailand because it is also the perfect time for harvesting Thai fruit like mangos.

The Director of the Cultural Promotion Department, Chai Nakhonchai shared that Milli helped promote Thailand’s soft power among international audiences when she ate the mango sticky rice on stage. The director informed Thai media that the dish was on the list of cultural elements that the department planned to propose to UNESCO to be included as Thailand’s intangible cultural heritage. He also added that the dish has also been included in the ‘Thai Dishcovery’… New Thai Dish for New Gen Project, which invites new-gen chefs to transform the loo and design of various dishes from traditional Thai cuisine.

Another part of Milli’s performance that won the hearts of many Thais was her rap lyrics, which revealed “interesting and sarcastic facts” about Thailand, like the fancy and pricey street lamps (scandal), where the lamps appear to have cost many thousands of baht, the hot and hotter seasons, Thai railway lines, which have gone largely unchanged since the days of Rama 5, and also dispelling rumours about Thai elephants… that Thai people don’t ride elephants to work and school.

While many Thais praised her performance and how she promoted Thai dessert on the international stage, some thought it wasn’t good manners to eat during her performance. Some also speculated that her stunt might ruin the reputation of Thai food instead of promoting it.