Prosecutors in Thailand have seemingly taken an about face as they have officially indicted Vorayuth “Boss” Yoovidhya, the heir of the Red Bull empire, on “reckless driving causing death” and drugs charges. The latest moves in the cases follow intense public backlash after the cases was being dropped altogether 2 months ago by the deputy attorney general. The indictment comes 8 years after the incident where Boss allegedly crashed his silver Ferrari into the motorbike of a 47 year old policeman, dragging him along Sukhumvit Road for 100 metres, killing him.

Since the dropping of the case, Thailand’s judiciary system has come under extreme scrutiny with multiple investigations into different arms of the judicial system. As the case was reopened, investigators found that Boss had allegedly taken cocaine before the incident, but it was originally explained away as being taken by him as “tooth medication”. Now, officials say they have fresh evidence that could corroborate the claims that Boss was indeed under the influence and fled the scene of the deadly accident.

The evidence also includes a public transport expert estimating that Boss was driving at a speed of between 160-190 kilometres per hour when the crash happened as well as a Chulalonghorn physics lecturer providing his own estimates of the high speed. The new evidence will reportedly be used in the revived case after being “missing” in the initial investigation. 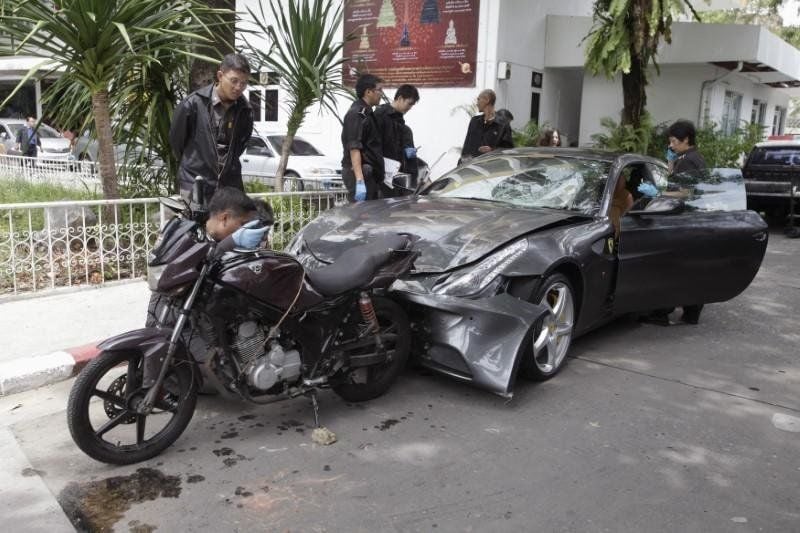 Despite many claiming the original case was dismissed due to favouritism of the elite and rich Thais, an office of the attorney general spokesman says that is not the case, as the prosecutor made the decision based on the evidence he had at the time. The new indictment is reportedly due to new evidence, mainly the evidence of his excessive speeding.

Boss, now 35, is the son of the co-owner of Red Bull energy drink empire. The Yoovidhya family is ranked the second richest family in Thailand. He allegedly drove a Ferrari at the time of the accident in which prosecutors say he crashed into the back of a police motorcycle in Sukhumvit, Bangkok, killing the driver, Pol Snr Sgt Maj Wichian Klanprasert.

After delaying hearing charges against him 7 times, Boss reportedly fled the country to Singapore, 2 days before he was due to face the charges in his family’s private jet. Authorities say they will now issue an Interpol red alert as his whereabouts are unknown at this time.

Such charges of reckless driving causing death, carry a 15 year sentence in the Thai judicial system. Boss has not returned to Thailand since fleeing the country in 2017 but has been seen, and photographed, at the family home in London and at Red Bull promotional events since then.