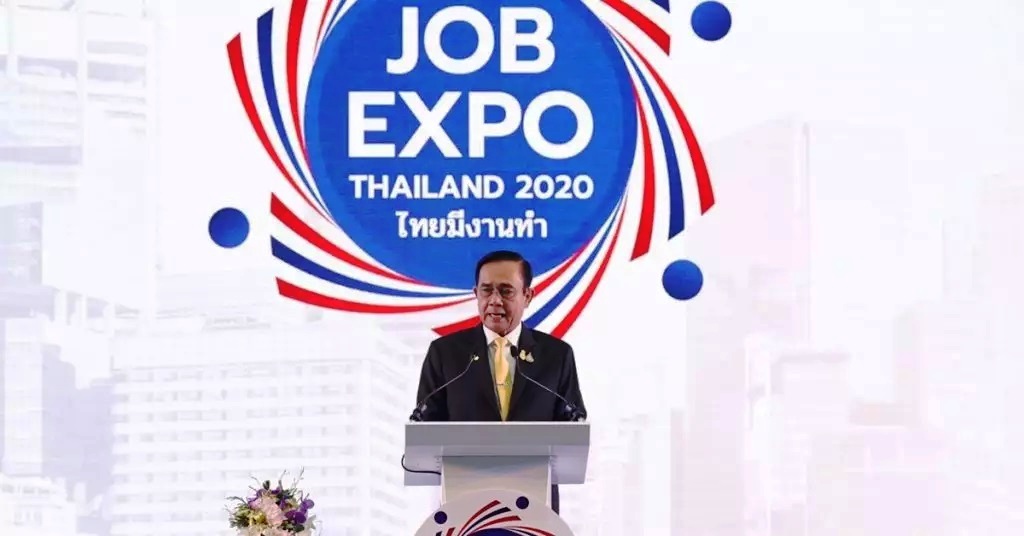 The Prime Minister on Saturday opened Job Expo Thailand 2020, promising over a million soon-to-be-listed jobs in Thailand.  The Job Expo comes as the Gen Prayut’s government fights massive unemployment in the wake of the Covid-19 pandemic.

The Job Expo is not only being held in Bangkok, it is also running in other provinces across Thailand. Tens of thousands of Thais on Saturday flocked to the government-organized job expo.

Thailand’s economy could shrink by a record 8.5% this year, with its key tourism sector taking a beating. Leaving Thai workers young and old alike searching for work.

More than 570 booths, from public organisations, private firms and for roles overseas, were set up for job seekers at a “JOB EXPO THAILAND 2020” in Bangkok. Tte job expo runs until Monday.

“I got laid off,” said 23-year-old Chanissara Prommas. “I used to work for Hong Kong Airlines, but the company couldn’t deal with the cost, so they had to let go some of the staff”.

Teera Magaumpai, 50, who lost his job after 30 years in the tourist sector, said the big crowd reflected huge unemployment and “elders have to fight with first jobbers”.

Some of Thailand’s biggest firms were among those offering jobs. Including agribusiness Charoen Pokphand Foods CPF, Telecoms firm True Corp TRUE and energy group PTT, which is majority owned by the government.

Although Thailand, which has suffered just 3,522 coronavirus infections, has lifted most restrictions and daily life and work is mostly back to normal, a ban on foreign tourists remains in place. Cutting a swathe through a whole sector of career opportunities.

About 1.24 million jobs will be offered to people in Thailand. With most in the private sector, and a little over 100,000 in roles overseas. Of that total, the government will help companies pay half in hiring 260,000 new graduates for a year.

“People are the most important part of the country and for moving it forward,” Prime Minister Prayuth Chan-ocha said as he opened the event.

The job offer is part of relief measures as the government has introduced a 1.9 trillion baht ($60 billion) package to stimulate the economy.

Labour Minister Suchat Chomklin said the job expo was particularly designed to help new graduates who may struggle to find work due to a lack of experience.

He said the ministry launched the “Thai Mee Ngan Tam” (Thais Have Jobs) recruitment platform yesterday. It will list job opportunities from government agencies. Also state enterprises and the private sector as well as overseas.

Another highlight of the expo is the “Co-Payment Scheme”, a program created by the Ministry of Labour. It offers companies hiring new graduates by subsidising 50% of their salary for one year.

“New graduates may remain jobless for a long time if they are not hired one or two years after graduation. “The subsidy aims to address this and help them move forward in the labour market,” Mr Suchat told Reuters.

He said the participating organisations will have to follow the ministry’s conditions. Which prohibit them from laying off more than 15% of employees in one year.

If violations are detected, the employers will be forced to pay back the subsidy in full, he warned.