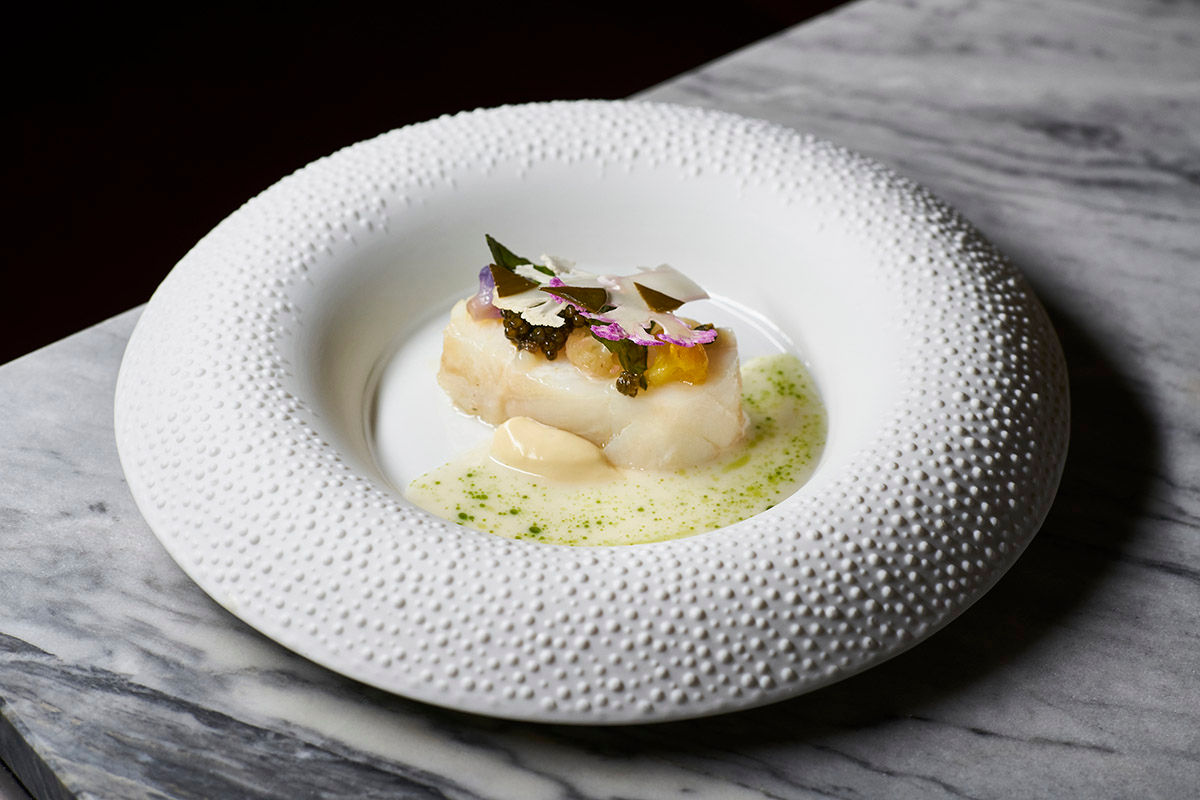 The exquisitely prepared and presented nine-course tasting menu at Côte by Mauro Colagreco restaurant is a perfect way to discover the extraordinary talents of Chef Davide Garavaglia. Prestige recently stopped by for a memorable meal and a chat with this remarkable culinary talent.

For many – myself included – Côte by Mauro Colagreco is the perfect distillation of what fine dining’s all about. This one-Michelin-starred restaurant, at the Capella Bangkok hotel, ticks all the boxes when it comes to impeccable décor, location, service, and style, but it backs it all up with expertly conceived and prepared dishes that are as bold and challenging as they are undeniably delicious. And while conceptually the official name under the title here is Mauro Colagreco, the renowned Italian-Argentine chef who rose to superstardom with his three-Michelin-starred Mirazur restaurant, it’s locally-based Chef Davide Garavaglia who’s the one dazzling diners on a daily basis.

The Italian-born Davide, who looks too young and too skinny to be such a talented chef, first began working with Chef Mauro at Mirazur back in 2015. Having obviously proved his talents, he was assigned to helm the kitchen at the Bangkok restaurant, which opened in late 2020. However, he also received something not many chefs working in name-branded restaurants get… total freedom. “Yes, it’s very good,” he admits during our pre-meal chat. “I don’t have to ask Mauro ‘can I do that?’ every time.

“I hope to represent his philosophy as best I can,” he goes on to say, but, of course, at 33 he’s also more than ready – and able – to put his own individual stamp on things.

An excellent way to delve into Chef Davide’s culinary vision is to order his marvelous nine-course ‘Carte Blanche’ dinner tasting menu, which alters season by season but also, in smaller ways, day by day – reflecting the best produce obtainable. Also available for lunch on the weekends, it’s worth noting that this is a mystery meal, since no printed version of the menu is provided till afterwards, as a parting souvenir (just let the kitchen know in advance if you have any food restrictions).

The feast begins with a series of bite-sized amuse bouche delicacies, the first two, on my visit, being the diced raw bonito on seaweed tapioca cracker (with fresh garnishes from the hotel’s greenhouse), and a crispy tart holding a golden sphere, created from Parmesan cheese and onion jus, topped with tiny icefish (all of which deliciously explodes when popped in the mouth).

Three more delightful bites follow in rapid succession – BBQ mussel on a tempura ball, a yummy beetroot macaron with goat cheese, and a wonderful panisse (rectangular chick pea cracker) topped with sardine and trout roe – before the signature table bread arrives. Served on a large tree bark plate, the bread is accompanied by a lemon ginger extra virgin olive oil and a printed poem by Pablo Neruda celebrating the sharing of food and family. It’s also one of the only menu items that, thankfully, never changes.

At this juncture the first of the nine ‘Artisan Wine Pairings’ begins, and a glass of golden 2020 Niepoort Redoma Reserva Branco from Portugal magically appears in my glass. Pairing beautifully with the wine is the Icelandic sea urchin with Sicilian prickly pear.

Resembling a dollop of reddish-orange sorbet, it comes served in its own dark brown sea urchin shell. It’s beautiful to look at, but it’s also a brilliant combination of very unlikely flavours; proof positive of Chef Davide’s immense culinary creativity. If everything up to this point was “wow”, this is “whoa!”. And there are still eight more plates to come.

Next to arrive is a dish of thinly sliced swordfish (an absolute favourite of mine), with sliced porcini mushroom, pistachios, and a sprinkle of finger lime. Aptly described as ‘Parma ham’ – and it does resemble it texturally – this dish is, in a word, divine. And it’s made even more so when paired with a glass of heavenly Suenen C+C Blanc De Blancs Extra Brut Champagne. Incidentally, Thanakorn “Jay” Bottorff, Head Sommelier of Capella Bangkok, points out while pouring that Côte restaurant was recently accredited as having the largest selection of Champagnes in Thailand.

While savouring the next course – a delicately tender Brittany langoustine served with Khao Yai tomatoes and two different sauces – I take time to ponder my elegant surroundings. I’ve made multiple visits to Côte, and I’m always impressed by the attractiveness of the restaurant’s interior. It’s stately and sophisticated, but always welcoming, with polished wood tabletops and beautifully upholstered comfy chairs that bring to mind private gentlemen’s clubs of yore. Then there’s the views of the meandering Chao Phraya waterway below, visible through the expanse of large windows that line the river-facing wall. In short, it’s a dining room that lets you know you’re seated somewhere special.

Focusing back on the food, I’m treated next to a thick filet of magnificent Mediterranean black cod, accompanied by cauliflower purée, sliced cauliflower, Kristal caviar, and a sake sauce that’s deliberately poured so that it only covers half the plate. Naturally this gorgeous dish gets a sake pairing – in this case a nicely complex ‘Ohmine 2grain’ from Japan. It’s moments like this when I really have to remind myself I’m actually working.

The next courses also focus on seafood, beginning with perfectly prepared chunks of slow-cooked octopus, ingeniously served with Jerusalem artichoke foam, cep mushrooms, and a tamarind sauce – a nod to the produce of Thailand. After this, a Gillardeau Oyster No 2 from France arrives, hidden under a white garlic purée, with chili garlic and deep-fried kaffir lime adding both spice and colour. Once again I’m struck by the amazing juxtaposition of flavours, and how they manage to dance together so easily on the palate.

When the final main arrives I’m happy to discover it’s pigeon, a protein that seems to be gaining a lot of popularity on Bangkok menus these days. Here the bird is presented in all its glory, with slabs of juicy pink breast meat taking up most of the plate, with some thigh and a tiny cooked heart off to the side. Steamed bok choy adds a pop of green, while a smidge of black sesame and black olive vinaigrette, plus a drizzle of jus, completes the picture. But what of that one large black olive I see? Well, turns out it’s actually pigeon liver paté made to look like an imposing olive.

Satisfying in every respect, the pigeon dish is a beautiful finale. It’s a pity when chefs who start strong with the small bites end up fumbling with the mains, but here it’s a case of just going from strength to strength.

A pair of desserts follow, starting with guava granita and chili powder served in a cool transparent spherical bowl (a dish inspired by the traditional Thai way of eating guava with chili and salt). Finally, a dish of fragola grape ice cream appears, hidden under a velvety, sponge-like lid made from steamed cacao (and a few other ingredients), all dusted with hibiscus and various spices.

Over a quintet of yummy petit fours, and a shot of espresso, Chef Davide joins us again at the table for a post-dinner chat, talking a bit about the ongoing evolution of his ‘Carte Blanche’ set dinners.

“Because we’ll follow the European autumn, next month there will be more game meat again on the menu. From October until January we’ll have venison, pheasant, partridge, wild duck, and consommé with wild boar.”

And what about the maestro himself? Is Mauro planning a return visit to Bangkok soon?

“He was here in July and is planning to come back maybe at the end of November or beginning of December,” the chef informs us, adding that each time the boss visits he’s happy and excited to recognise returning customers.

I’m sure he’s also equally happy to see that his skilled protégé and the whole award-winning Côte team have done such an excellent job with the restaurant that proudly bears his name.