In one of the country’s least-visited prefectures, chefs dramatically sear bonito over towering flames.
On the south side of the island of Shikoku, framed by two enormous peninsulas, Kochi is one of Japan’s least-visited prefectures – at least by foreigners. It’s a popular destination for Japanese Shingon Buddhists looking to worship at the auspicious 88 Temples of Shikoku, the country’s most famous pilgrimage trail. But it’s also popular with pilgrims of another kind.

Inside the Hirome Market in Kochi City on a humid August evening, diners were packed shoulder-to-shoulder on communal tables, surrounded by shops and stalls. The hungry chatter grew and the tables quickly filled inside the sprawling, single-storey structure as dinner time approached. Hirome is as busy as this throughout the year, and no matter the season, the most sought-after dish in town is katsuo-no-tataki (seared bonito). 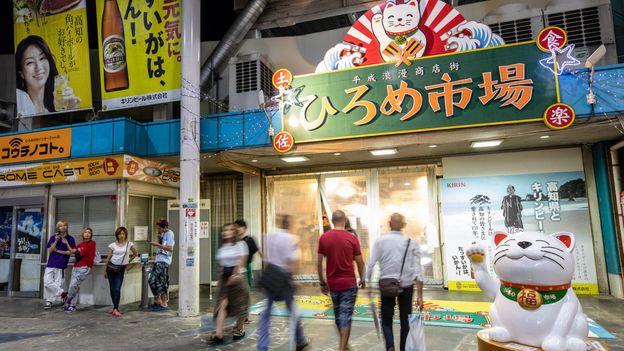 Often called “skipjack tuna”, these smaller cousins of tuna are normally found deep at sea, but they swim unusually close to shore just off the Kochi coastline, following large schools of sardines carried by the Kuroshio current. This close proximity allows Kochi residents to eat the fish at its freshest, and over the years, local chefs here have developed a dramatic cooking technique to maximise the bonito’s flavour.

The tataki cooking technique is now used around the world, but it originated here in Kochi. Literally meaning “to hit”, it’s a brief searing method lasting around 90 seconds, in which fish or meat is cooked over towering straw-fuelled flames. The flames partly cook the outside of the fish, searing its dark flesh black and leaving its exterior with an intense, smoky barbecue flavour while its inside retains a raw and succulent sashimi quality. Chefs roughly cut it with huge knives into thick slices and serve it alongside spring onions, ginger and garlic and seasoned with salt or soy sauce. 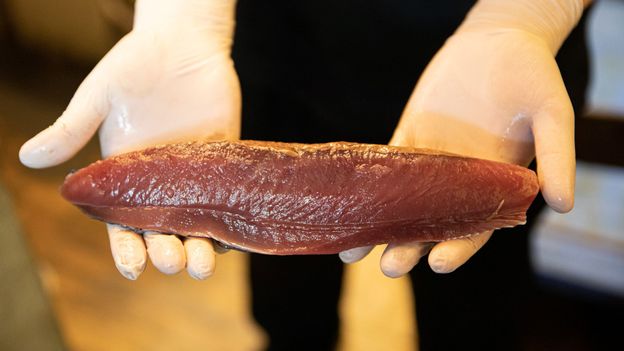 These days, Japanese restaurants apply the tataki technique to salmon and even beef, but its smoky source harks back to bonito. In fact, it’s become so popular in Kochi that people regard it as a symbol of the whole prefecture – and travel from far and wide to sample it.

“We have katuso-no-tataki at home as well, but I heard about how good the Kochi one is, so that’s why I came to the market,” said Kazuko Watanabe, who travelled from Japan’s Gunma prefecture, some 800km north. “The quality at home is different – it’s better here.”

Watanabe had given into her cravings and ordered two portions of the dark, delicious fish.  Several other diners around the noisy indoor market had done the same thing – including me. 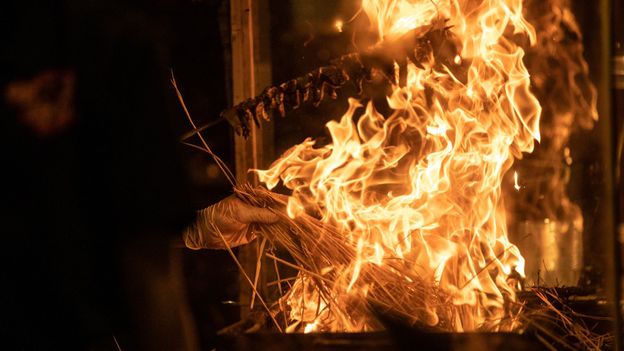 The chef has to simultaneously keep the fire at its most furious and turn the fish to ensure an even sear (credit: Jamie Lafferty)

In 2011, I embarked on a 100-day trip which took me to all of Japan’s 47 prefectures. I ate incredible dishes all over the country, from Kyoto’s extraordinarily ornate, multi-course kaiseki dining to toriwasa (raw chicken) in Nagano to shirako (cod sperm sacs) in Aomori to the fabled beef in Kobe. Yet, above them all stood the tataki in Kochi.

Several stalls within Hirome Market sell seared bonito, as do establishments all over the city, but the one I’ve never been able to forget – and the one with the long queue in front of it – was Myo Zhima (literally: “The Bright God”).

Myo Zhima’s brave chefs stand in front of the stall’s fierce flame, feeding it more straw while cooking four fillets of bonito at the same time on large spikes. When the inferno is at its largest, the faces of customers and staff are bathed in an orange hue. “We learn everything about it, from cutting, to serving to the burning,” explained Myo Zhima’s chef, Masayoshi Sawada, during a break. “The first time I had to cook it, it was very difficult – I remember it was incredibly hot and I really needed some water.” 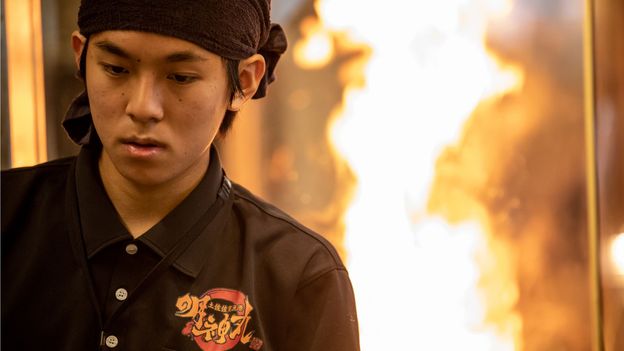 The cooking is quick, but with 2m flames soaring towards the ceiling, the 90 seconds can feel like an eternity for the cook, who has to simultaneously keep the fire at its most furious and turn the fish to ensure an even sear. While other stalls offer it around the market, Myo Zhima is the only one preparing it so flamboyantly and publicly. It’s also the only one with its own ship and fishermen, who make daily deliveries of fresh bonito from the sea straight to the stall each morning to ensure its just-caught freshness.

“Tataki is the unique specialty of Kochi and I think we’re so popular because we’re doing the cooking in front of the customers,” continued Sawada. “This is very impressive for them – around 90% of the customers take photographs.” At dinner on an average weekday there is a perpetual queue outside the Bright God, but on weekends, when diners have to squeeze inside the market, most people get a double order to avoid queueing twice.

You may also be interested in:
• How a plant saved a Japanese island
• Japan’s secret udon mecca
• Is Japan losing its umami?

Twenty-four-year-old Sawada has been working here since he was a teenager and he and the stall’s small team flame-grill a near constant supply of roughly 200kg of bonito each day from the Myo Zhima ship, which gives the eatery its name. This same-day, ocean-to-table service is a big part of why the stall is so popular. 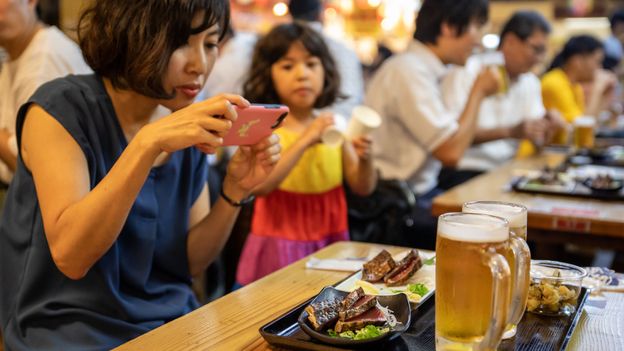 Yuri Yamazaki returns to her hometown of Kochi from New York every year with her daughter (credit: Jamie Lafferty)

Eating sashimi in many places is a delicate, esoteric experience, but not so here. Katsuo-no-tataki’s bold, intense flavour seems to directly reflect the boisterous atmosphere in the market – and the rich, fleshy slices are almost always paired with a beer. The fish’s seared exterior and juicy interior is one of life’s great bites, especially when accompanied with salt and a thin slice of garlic. Ordering only one portion is an exercise in self-control. Some visitors fall so in love with the dish that they pay extraordinary amounts to have it flown to their homes in other parts of Japan, even if it loses some of its famous freshness along the way.

Ordering only one portion is an exercise in self-control

“We eat more katsuo than anywhere else – and we drink more beer,” chuckled Yuri Yamazaki, sitting at the table next to me with her own bonito. “We’re fun-loving people.”

Originally from Kochi, Yamazaki has lived in New York for the last 10 years. She’s made a point to bring her five-year-old daughter to Kochi every year since she was born, and, inevitably, to the Hirome Market, too. During this six-week trip, the two had been here four times, and for the third time they’re having the katsuo-no-tataki from Myo Zhima. Will this be the last time? “Well, it’s supposed to be, but let’s see,” Yamazaki said. “I didn’t know it was so famous until I actually left my home prefecture.” 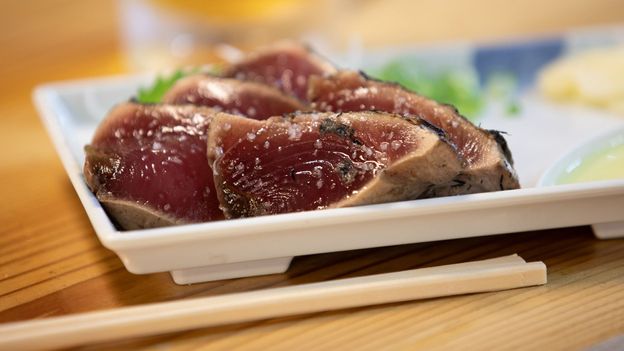 Chefs cut the tuna into thick slices and serve it alongside spring onions, ginger and garlic and seasoned with salt or soy sauce (credit: Jamie Lafferty)

While katsuo-no-tataki’s origins are unclear, some believe it originated with Sakamoto Ryoma, a 19th-Century rebel samurai and Kochi’s most famous son, who was assassinated by pro-government forces in 1867. Some claim that Ryoma saw the tataki technique in Japan’s southern Nagasaki prefecture, one of the first areas to open up to foreigners after the end of the Sakoku period (Japan’s secretive period of isolation from 1633-1853).

Whether or not this legend is true, there’s no doubting that just as Ryoma’s martyrdom has come to be a symbol of Kochi over the years ­– his face appears on posters and products around the city – so has the seared fish. Even the prefecture’s yuru chara, ordinarily a cute mascot designed to help drive tourism, is an almost frightening beheaded bonito head on the body of a man. Cartoon-like drawings of the fish are also found on drain covers around the city.

As people kept coming and going at the communal market tables, I met 76-year-old Kochi native, Yoshihiro Kashiwai. For the retired telecoms salesman, access to the best bonito is key to the dish’s remarkable popularity. “The fish here are very fresh, they swim very close to Kochi, so we can get them and sell them at reasonable prices,” he nodded. “You can get it in Tokyo as well, but there it’s very expensive. I started eating it as a child, but even today, it is still my favourite.”