Patcha “Praew” Kitchaicharoen, is one of a few Thai female photographers in the industry. Aside from her photography, she is also known for her acting role in a Thai film “Happy Old Year” back in 2019.

Currently, she is doing both commercial photography as well as her own photo collections, while describing herself as a “creative” food and still-life photographer.

“It must include the word “creative” in front of it, not just a food or a still-life photographer, because I want to show my creativity in my work too.” 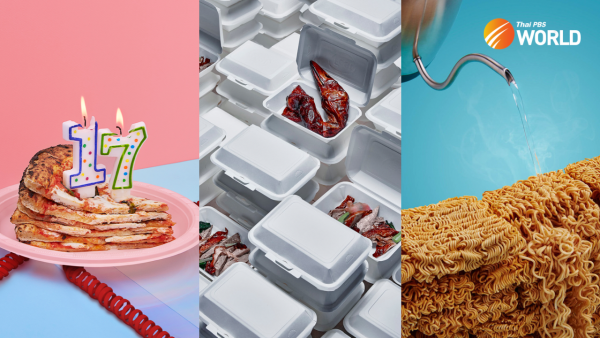 Creativity is a must

Before she became a photographer, Patcha studied Visual Communication Design at Silpakorn University, where she learnt some photography basics for graphic design and advertising subjects.

After her graduation, she started her job as an art director at a company that designs film posters. Patcha explains that she had to go on set to watch over photoshoots, as well as directing poses for actors, then she would airbrush and edit those photos into posters. This helped her realise that photography is what she truly enjoys.

“I felt that it was much more fun being on set, doing art direction, than being in front of a computer airbrushing photos. So, I thought to myself, maybe photography is what I really want to do.”

That led to her quitting her job and taking up photography internships for a year, during which Patcha took on various assignments, from modelling shoots to jewellery close-up shots, but she felt that something was missing.

“I’ve tried every genre, and I felt that everything is all over the place,” she said. “I felt a bit burned-out too, because, back then, I didn’t know how to use my own creativity in my work. I’ve always been following the clients’ briefs, as in whatever they asked me to do, I would follow them, but I didn’t really get to use my brain.”

Patcha then decided to fly to New York to further her studies at the International Center of Photography. This was when she realised that her real interest is in food photography.

“Well, it took me a long time to find myself,” she explains. “I think we have to try everything, as much as we can. Before I realised that I love food and still-life photography, I had taken photos with models, cars, clothes and everything else. That was when I realised that I don’t really like taking photos of models, because it’s hard to control and I don’t like chit-chatting with people.”

As to what has ignited her deep passion for food photography, Patcha explains that it started with her final project before completing her studies in New York, where she felt she had some “conflict” with food, which she combined the topic with the word “family”.

“When there are problems among family members, it always happens at dinner tables. So, to me, food is not just food, but it is also a memory. It’s also like my father’s portrait, my mother’s portrait and my whole family’s portrait.”

As for this year, Patcha’s favourite project is called “TestShoot”, where she created her own concept. She explains that this photo collection is similar to what she wanted to do for her commercial photography. This project is, however, more “freestyle”, as there’s no client dictating how her photos should look. The most outstanding feature is the animation, similar to a GIF image, but more sophisticated.

“All of the photos that I created in this collection were something I wanted to pitch to the clients but which no one liked. Some reflected parts of my life experience, which can be combined in such photos, but I wasn’t sure when to release it, because it may not fit their products.”

Apart from pouring in her own creativity, this project also adds the missing pieces to her existing portfolio. As Patcha explains, she felt that there was not enough photography of Japanese food or cocktails. At the same time, she also decided to include her recent road trip in the United States as well.

“I like this collection the most because it truly reflects who I am. There’s no one controlling my work, no branding colours involved and no specifications on how big the product should be.”

While most of her commercial photography shoots are colourful, fun and somewhat quirky, her personal projects tend towards neutral tones. Even if there are stark differences between commercial and personal work, Patcha feels that both of them reflect her identity, adding that having her own projects helps to balance things out.

“Personally, I think, if I only take up commercial photography throughout the year, I think it’s too much and it’s overwhelming. So, having personal projects, where I get to shoot whatever I want, I think it helps me release something, but I think both commercial and personal work are still me.”

Not many female photographers

During her early years of her career, not many Thai female photographers were recognised in the industry. As the 35-year-old photographer explains, she could only name three female photographers at most back when she was young. The male-dominated environment has somewhat led to her being underestimated by her colleagues.

“When they first saw that I’m a woman, they would hold prejudice against me, whether I could do it or not,” she explains. “Because, if I couldn’t, assistants who may have worked with professional photographers before, for example, would often think that I’m still a baby when they see me. It’s not necessarily belittling, but they would assume that I could not do it.”

While admitting that she used to be nervous and afraid of mistakes in the studio, the only way for Patcha to prove herself as a professional photographer was to get on with her job and use her knowledge as much as possible. The most important weapon for her, however, is staying confident.

“I try to do the opposite [of what they think of me]. I know I can do it. Meaning that I’ve studied photography a lot, so they cannot underestimate me. If I prove to them that I can do this, those men will respect me more and eventually reduce their own ego.”

My hair doesn’t define my sexuality

We can say that her photography style is as bold as her identity, particularly with her almost skinhead hairstyle, which is considered unusual for Thai women. As long hair is much preferred, women with very short hair are often stereotyped as either being a “tomboy” or going through some sort of heartbreak.

Patcha was, unfortunately, one of them. From the confused glares she used to receive, no matter where she went, Patcha was often questioned about her masculinity, because of her hairstyle, and even went through bizarre misunderstandings by complete strangers, such as whether she was ordained or receiving chemotherapy.

“It was harsh,” she said. “Everywhere I go, every single day, when I’m eating, people would seriously stare at me, at every restaurant. Whenever I walk past motorists, taxi drivers or even an auntie at a noodle shop, they would stare at me.”

In fact, Patcha shaved her head back when she was in New York, not because of a heartbreak or in rebellion against the beauty standards, but her simple-yet-surprising reason was that she couldn’t be bothered to waste her time blow-drying her hair.

“I just get frustrated,” she confessed. “I’m a workaholic myself, so, for me, one hour to blow dry my hair is a big waste of time. Maybe, because it was New York as well, as the atmosphere encourages people to express themselves freely.”

Nowadays, Patcha no longer takes such comments about her hair personally. Instead, she decided to make a joke out of it instead.

“Before I wasn’t sure how to respond, even though I was confident with my hairstyle. Now, I take it as a joke. Let’s say an auntie from a noodle shop asks me whether I was ordained, I would say ‘I rejoice in your merit’ and she would go ‘Sadhu’ to make it funny.”

At the same time, she feels that Thai society is becoming more aware that people should never bully or make fun of others, just for being different.

“I feel that comments about my hair are not so harsh to me anymore, because people no longer make fun about being a lesbian, a tomboy or for shaving our heads. I don’t want to say anything else now, because the trend is making people aware of what we can or cannot make fun. I’m just a supporter of this trend.”

“Work hard until you no longer have to introduce yourself”

With more Thai female photographers getting greater recognition than in the old days, Patcha is glad to see more gender diversity in such fields, which is often deemed as a male-dominated career.

“I also get to see more young photographers, more female ones, or even someone the same age as me, getting more attention. There are also more female film directors too, which I think is a great thing.”

When asked how she would like to inspire other women to follow their own passion, she decided to grab her phone to find her favourite quote, which she uses as a motto in life.

“If it’s about work, I like this quote; Work hard until you no longer have to introduce yourself. It’s about trying really hard, and I had been working super hard before I became who I am today.”