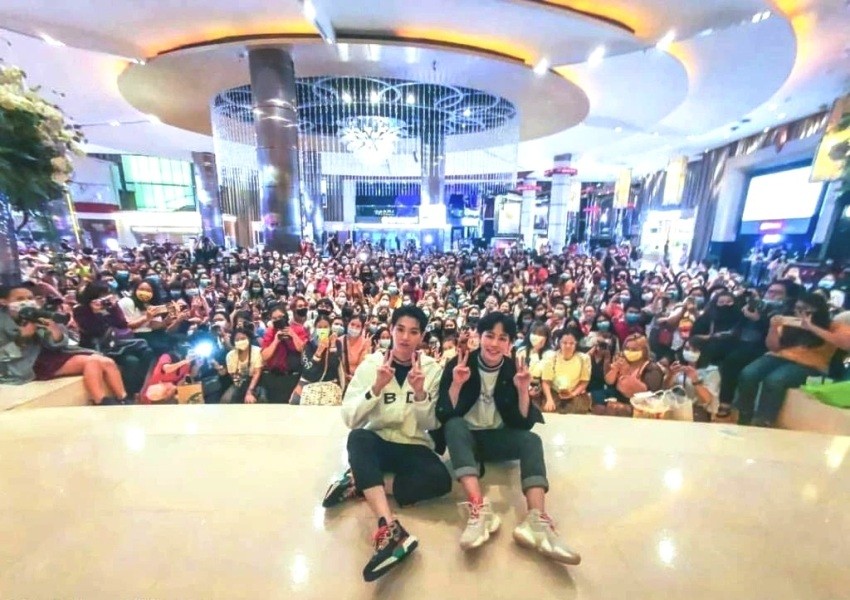 Acting duo Anan “Ying” Wong and Wanarat “War” Ratsameerat had come to the Cineplex theater to promote “En of Love” is a Thai drama.

Photos on social media showed fans of the duo tightly packed together to take photos with their idols. The photos sparked immediate concern about the total disregard for social distancing rules.

The event also sparked concerns with Gen. Pornpipat, security chief of the Centre for Covid-19 Situation Administration (CCSA). Who said violators of social distancing measures and other rules would face immediate legal action.

He went on to say that all businesses must comply with the rules. Above all on screening visitors and enforcing social distancing standards to prevent a virus comeback. Any businesses violating the measures will face the maximum legal penalty.

A spokesperson said the theater would remain closed for three days to improve safety and health measures. Cineplex also apologized for the “inappropriate” use of the space. Also over safety rules set by the company being ignored.

The Cineplex theaters at Siam Paragon are owned by Major Group, which rents the space from Siam Piwat. Major Group, a listed company on the Stock Exchange of Thailand. It also posted a Facebook message apologizing for the event. Saying it placed great importance on the welfare of moviegoers.

Theaters reopen on June 1st and ordered to maintain safety measures by the CCSA.  Major Cineplex Group reopen its movie theaters throughout Thailand. Movie goers were also asked to refrain from eating popcorn or drinking because saliva droplets could spread covid-19.

Couples were allowed to sit together but face masks must be worn at all times. Theater seats and ventilation systems must also be thoroughly cleaned after each screening.

Apichart Kongchai, chief cinema officer of Major Cineplex Group, said his company has cleaned and sanitized all its theaters daily. Their air-conditioning and ventilation systems have also been activated twice a day.

They will keep social distancing by being one meter apart in queues, being separated from staff with partitions and being seated two spaces apart in same rows and diagonally opposite other viewers.

Meanwhile, the CCSA also plans to open higher-risk businesses such as bars and nightclubs in the next stage. Also providing Covid-19 numbers remain low.