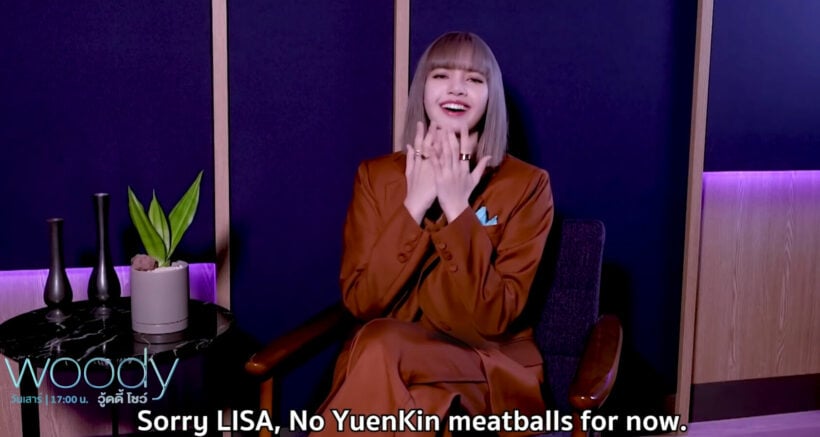 PHOTO: The moment Lisa from Blackpink found out she couldn’t get her beloved Buri Ram meatballs. (via YouTube screenshot)

After the legendary K-Pop group Blackpink’s Thai-native member Lalisa “Lisa” Manoban gave an interview where she said that if she travelled from Korea to her hometown of Buri Ram the first thing she would eat is the local grilled and deep-fried meatballs, the province has been experiencing a rush on fans buying the traditional meat snack.

People have been ordering the meatballs from other provinces and local vendors at the Buri Ram railway station reported their sales went from a few hundred baht a day to over 10,000 baht a day. People are ordering online for delivery to receive a taste of K-pop star Lisa’s favourite snack she revealed with an interview with Woody.

The president of the provincial Tourism Industry Council thanked Lisa for the tremendous boost in revenue for vendors in dire need since the Covid-19 pandemic has devastated their income. The rush on K-Pop endorsed food is reminiscent of the BTS Happy Meals that forced Indonesian McDonald’s locations to close after being overrun by throngs of fans.

Lisa had said in an interview that she had been away from her hometown for almost 2 years and she missed her parents’ home-cooked food and the now-infamous meatballs right outside the railway station. She mentioned their dipping sauce that was unique to Buri Ram.

The local treats are just 5 to 10 baht for a skewer and a bag sell for 60 to 100 baht with the prized sauce included at the various stalls in the area. And the little shop in front of the railway has promised Lisa free meatballs and sauce when she returns home.

Lisa is on a hot streak right now, even aside from the free meatballs, having recently released her debut solo video on YouTube with it becoming the fastest growing female K-pop video in history gathering 50 million views in the first 12 hours and, as of this writing, garnering nearly 153 million plays.

It had the 6th biggest video debut on YouTube in its first 24 hours, beating Taylor Swift and other BTS and Blackpink videos and being beaten only by three BTS songs and 2 Blackpink songs.

The popularity of the video even gained her praise from many Thai people for the music video featuring traditional Thai clothing and decoration and even received a shout-out from PM Prayut Chan-o-cha.