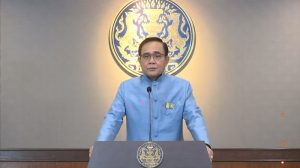 Thailand will relax some of the restrictions put in place to combat the spread of the coronavirus, Prime Minister Prayuth Chan-o-cha said this afternoon following a meeting with his cabinet at the Government House.

Saying they had agreed to extend the state of emergency another month, Prayuth did not elaborate on which restrictions would be lifted in the meantime. He said they would be detailed in a later announcement.

With the economy cratering and facing anger and despair over his government’s response to the crisis, Prayuth appealed to business owners to understand the government’s priority was in protecting the public from the coronavirus.

“Please give us your cooperation. Please endure for a bit longer. I’m in pain as well as you guys,” Prayuth said.

He also asked the public not to violate the limits put in place under the state of emergency declared last month to grant unfettered power to the authorities:

“Please don’t violate the Emergency Decree because it has kept us safe, even foreigners have praised us for these measures.”

Airlines are expected to resume domestic service on Friday, and most bans on alcohol sales are set to be lifted that same day. Many are expecting some businesses including shopping malls, hair salons and massage parlors will be allowed to reopen as soon as Monday.

His national address, steamed live online, came only minutes after the cabinet rejected a proposal to cancel this month’s four public holidays, as had been proposed by the national COVID-19 task force.

While Bangkok can once again get its hair washed, blow-dried and cut, forget about coloring it. Not allowed.

Meanwhile diners can be seated at restaurants not larger than “two shophouses” (what that means is unexplained) that have “good ventilation” (whatever that means) and don’t run the air conditioning during the hottest time of the year.

Those are just a few of the myriad rules, some confusing or unexplained, capital city residents face when they take tentative steps back toward normal this week, rules that business owners desperate for customers are wrangling with as the number of daily new coronavirus reports dwindles closer to zero.

Diners have started trickling back into restaurants, but many downtown still appeared empty as of Tuesday. Some had removed tables and chairs to create the mandated social distance between patrons; others had taken more innovative approaches.

In a number of restaurants, chairs were lined up, spaced out and turned to face the same direction, giving the appearance of an empty classroom.

The various conditions issued by the authorities for business to resume apply broadly to restaurants in commercial buildings such as hospitals, hotels and airports as well. Street food and hawker stalls are also included. Those located in department stores may only provide takeaway.

The only allowable alcohol might be found in the hand sanitizer all venues are required to make available.

Here is a list of the businesses that are conditionally allowed to reopen now, along with a smattering of the rules of what one can do – and not do.