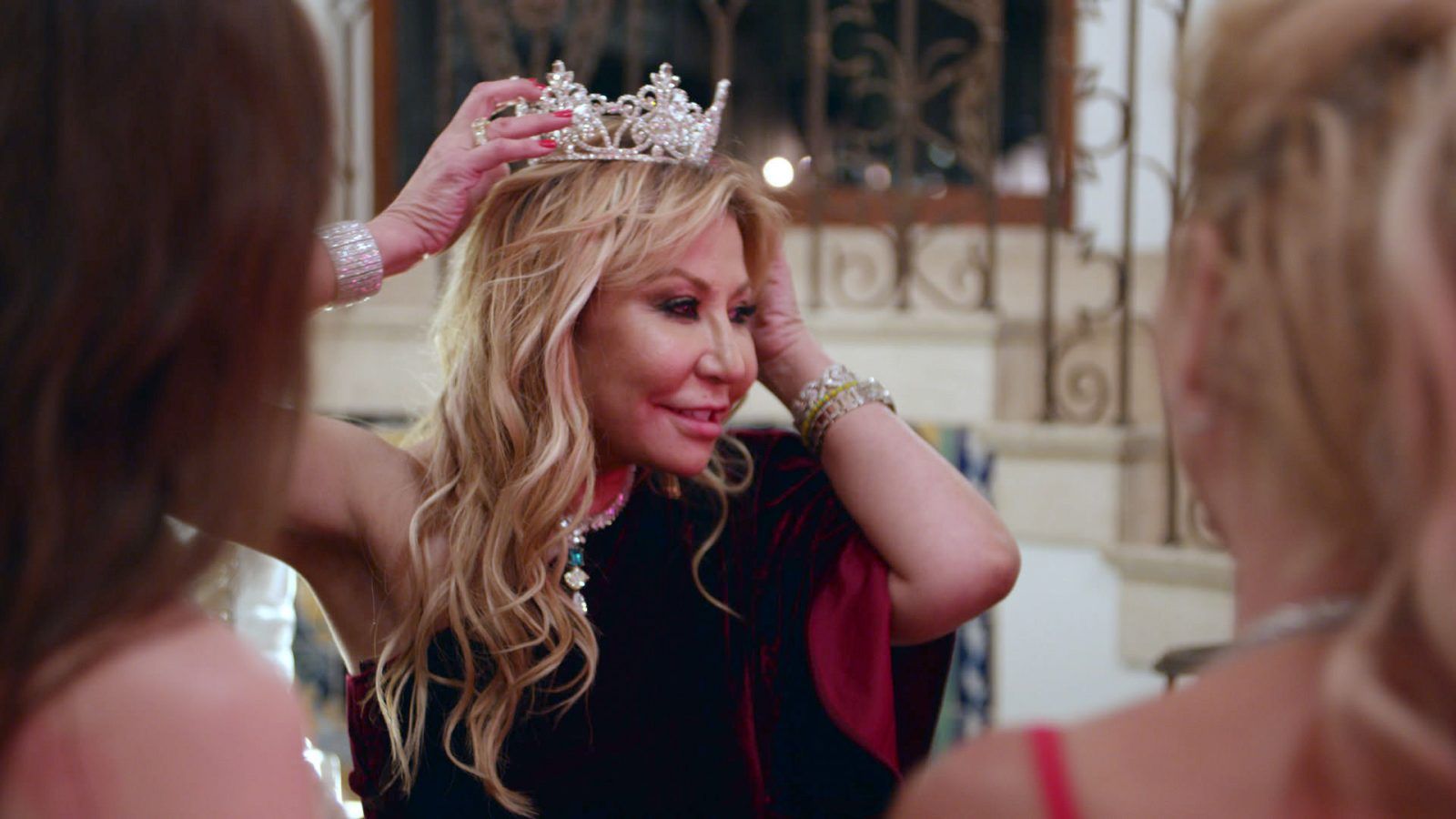 Bling Empire season 3 is here in full swing, and we’ve got questions. Here’s what you probably didn’t know about Anna Shay.

Anna Shay is one of the most celebrated stars of Bling Empire, the Netflix reality TV show which focuses on the lives of a group of real-life rich Asians who live in the US. Shay is specifically a hit among fans for her slick one-liners, smooth voice and her outlook on life. Her popularity is what makes people want to know more Anna shay.

With a high anticipation of a possible Bling Empire season 4, Shay, who is in her 60s, is sure to continue ruling as the ‘matriarch’ of the show.

Shay was born in Japan to Edward Shay, who founded American defence major Pacific Architects and Engineers (PAE) in 1955. Her mother, Ai Oizumi Shay, was part-Japanese and part-Russian. Her father’s successful business deals with American government entities such as the CIA was behind the family’s immense wealth.

Edward died in 1995. Shay’s brother, Allen Shay, became the chairman and CEO of PAE. In 2006, the company was sold to Lockheed Martin for an estimated USD 1.2 billion in an all-cash deal. Half of this, which is USD 600 million, is the figure cited in Anna Shay net worth estimations.

Her wealth makes Shay among the richest Bling Empire cast members by net worth.

Facts about Anna Shay that Bling Empire fans should know

Bling Empire is often described as the real-life Crazy Rich Asians, the critically acclaimed 2018 film about a professor who finds that the one she loves is a member of one of the richest families in Singapore.

In an interview with Oprah Daily in 2021, Shay admitted she hasn’t watched the film.

“I didn’t watch it. I was going to say, ‘I live it,’ but I thought that would be too snobbish. Because how would I know, if I didn’t see the movie? In the world I was raised in, ‘crazy’ is not a good word to put next to the lifestyle I was born into,” she said.

“I didn’t do anything except be born. It’s my parents. My dad is from the South Side of Chicago. My mother is from aristocracy…My mother said, ‘You were born in a crystal ball with a silver spoon’,” Shay added.

Shay was around seven when her family was moving from Japan to the US. She had a pet monkey at the time and was worried that authorities might not let her carry her pet. So, she dressed her monkey up and it sat next to her on the flight.

Recounting the experience, she told Oprah Daily, “The flight attendants all knew my parents. She looked at me and said, ‘Would your friend like a drink?’ I dressed her up. I didn’t know if she was a boy or a girl. I said, ‘She’s my sister. She’ll have some milk, please. And perhaps if you have a banana.’ They didn’t take the monkey away.”

She has been married four times and has a son

Shay closely guards her private life. Though it is known that she was married (and divorced) four times, she has never revealed the names of her ex-husbands. According to Tatler, one of her husbands was from Ireland with whom she visited Ashford Castle once.

She has spoken about the marriages on the show, saying that “even the divorce part was good.” But Shay’s wealth does not include anything from her ex-husbands, as the splits were amicable.

She has a son, Kenny Kemp, from one of her ex-husbands. Kemp is around 27 years old.

Her son is a cannabis paraphernalia collector

In 2015, Buzzfeed did a special story on Kemp and his massive collection of bongs (glass filtration devices commonly used for smoking weed).

According to Buzzfeed, the collection was worth half-a-million dollars at that time. According to the article, Kemp’s collection includes “pipes, pendants, marbles, and tubes featuring psychedelic swirls, fantastical creatures, skulls, and nostalgic references to Nintendo characters.” It notes that all of it is “legally paid.”

So where does Kemp keep his collection? In the basement of his mother’s Beverley Hills home, which once belonged to Hollywood legend Shirley Temple.

She didn’t know what to do with her cheques

When she received her cheques for appearing on Bling Empire, Shay was confused. As someone born into wealth, perhaps the idea of receiving a paycheck appears strange. But Shay shared her thoughtful idea about who she feels rightfully deserves her pay.

“I didn’t know what to do with them. I didn’t cash them, then I got in trouble for not cashing them. I have them in a savings account. I’d like to have a party some time. I don’t think the money belongs to me. I think it belongs to the crew that had to put up with me,” she told Oprah Daily.

She has a habit of dodging her security guards

When she was little and lived in Tokyo, Shay used to often slip past her security cordon. This made her father so worried that, according to Town & Country, he started auditioning new guards and testing them specifically to see if they could ensure his daughter’s absolute safety.

Shay still continues with her habit of evading her security ring and frequently does it whenever she can.

She keeps remodelling her house herself for her dogs

Jeff Jenkins, the producer of Bling Empire, told Town & Country that Shay has been trying to renovate her property for a long time. But doing so would mean that she has to move out to a hotel or another property. Since she has nine Golden Retrievers, it is almost impossible for her to rent a home or hotel suite.

This is why she has reportedly started doing the work herself, bit by bit.

“Every time I would go over to her house, a little bit more demo has taken place,” Jenkins said.

In fact, Shay’s first scene in Bling Empire shows her with a sledge hammer in her closet.

She ‘discovered’ Target sometime in 2019

According to Town & Country Shay said that “she just found out about Target two years ago.” Since the interview happened in 2021, Shay’s ‘discovery’ of the American retail giant can be placed sometime in 2019.

Shay said that she loves her trips to Target to buy groceries.

“You can buy so many things there!” she said.

Kane Lim, Shay’s fellow co-star and one of the prominent cast members of Bling Empire, also told Town & Country that Shay often shops after closing time, but they remain open for her if given a heads up.

Shay told Town & Country that she once happened to see a performance by a Cuban salsa band. Since the band was unknown and not successful, in Shay’s view, she decided to become their manager and producer. And she did that on the spot.

Language was a hindrance. The band possibly understood and performed in Spanish.

“At the time, I didn’t speak Spanish. I learned,” Shay said, indicating that she is very committed to her decisions.

Shay was once robbed at gunpoint

One of the most interesting facts about Shay is that she was once robbed at a Jack in the Box drive-through. But it is not the robbing which makes the story interesting, it is what she did while being robbed.

Sharing the story with Town and Country, Shay said that the robbers took the wallets of her two friends at gunpoint but missed noticing that she, too, had one. As they were making their escape, Shay called them out and herself handed them her own wallet.

“They came back and I said, ‘Here. Next time, three girls equals three wallets’,” she said.

Shay has an impressive collection of diamond jewellery. Her finest pieces include a necklace by Vatran’s Fine Jewelery made in Los Angeles, on which she herself worked with her jeweller. The necklace was initially fitted with a diamond. Later, an emerald and a white diamond were added to it.

She also has many designs by Boucheron, including a Boucheron Lierre de Paris necklace. Shay has said that her family has had a long history with Boucheron. But of all the glittering items in her possession, Shay’s favourite is the first engagement ring her father gave to her mother.

“I love the pieces they gave me over the years—they might be bigger stones—but the fact that he gave that to her is the most meaningful,” Shay told Only Natural Diamonds, a publication of the Natural Diamond Council.